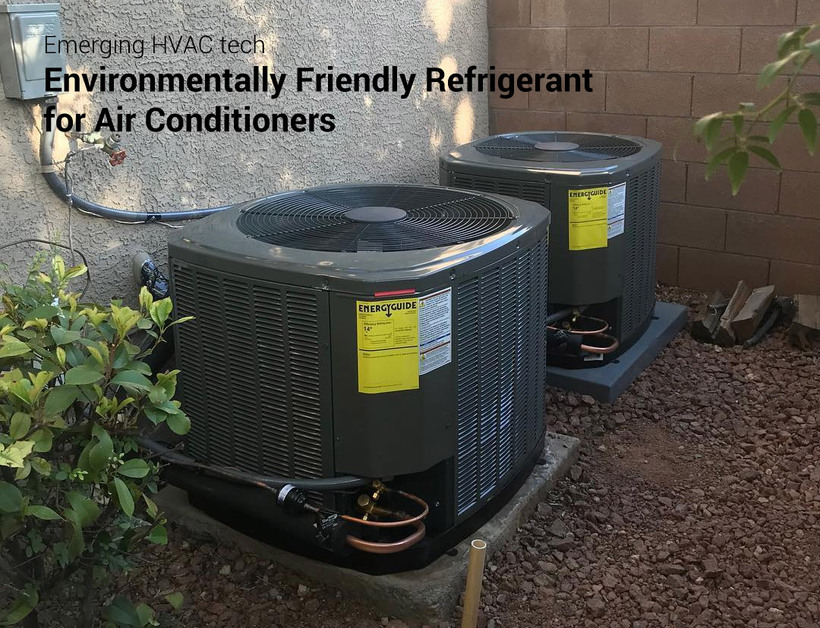 Spanish and British scientists have come up with an alternative to the traditional refrigerants used in the installation of air conditioners and refrigerators. Traditional refrigererants is considered not enviromentally friendly due to leak of potent planet-warming gases into the atmosphere during the time of their operation.

They have created an environmentally friendly solid refrigerant that can replace inefficient and polluting gases used in refrigerators and air conditioners.

The researchers have found that under high pressure, "plastic" neopentyl glycol (NPG) crystals exhibit excellent cooling properties, sufficient to compete with traditional refrigerants. This material is widely available, cheap, and performs well at near room temperature.

Most air conditioning and refrigeration systems use hydrofluorocarbons (HFC) or hydrocarbon compounds (HC) as refrigerant, both toxic, sometimes flammable causing damage to ozon layer and global warming when released into the atmosphere.

One of the professors at the University of Cambridge states that: “In addition to being harmful to the environment, refrigeration trucks running on FHC or HC gas also have poor performance. That's something to keep in mind as refrigerators and air conditioners consume about one-fifth of the world's electricity, and the demand for air conditioning in homes is on the rise, especially in cities like Las Vegas, Nevada."

This problem has forced scientists around the world to look for an alternative to refrigerants (and sometimes fundamentally new air conditioning technologies), primarily among solid materials. Specialists from the University of Cambridge and the University of Catalonia have discovered unusual temperature changes in NPG crystals that appear under high pressure.

In solid refrigerants, the cooling effect is achieved by changing the microscopic structure of the material by applying a magnetic field, electricity, or applying mechanical force. For decades, the caloric effect has been achieved by temperature changes in the liquid, but the discovery of a pronounced barocaloric effect (cooling under pressure) in NPG and similar organic compounds could revolutionize the refrigeration industry.

Due to the nature of their chemical bonds, organic materials are easier to compress and NPG is widely used in the synthesis of paints, polyesters, plasticizers and lubricants. Not only is it widely available, but it is also inexpensive to produce.

The NPG molecules, which are composed of carbon, hydrogen, and oxygen, are almost spherical and interact weakly with each other. These loose bonds in their microscopic structure allow the molecules to rotate relatively freely. That being said, the word "plastic" in "plastic crystals" does not refer to its chemical composition, but rather to its plasticity. Plastic crystals are at the boundary between solid and liquid.

NPG compression results in unprecedented large thermal changes due to molecular reconfiguration. The temperature change achieved is comparable to those commercially used in HFC and HC based air conditioning systems.

Finding colossal barocaloric effects in a plastic crystal could bring this technology to the forefront of research to achieve safe, environmentally friendly cooling without sacrificing performance.

Moya and his team are currently working with Cambridge Enterprise, the commercialization arm of the University of Cambridge. The nearest plans of scientists are to put this technology on a commercial footing.

What can i do to reduce AC's harmful effects for the environment?

All air conditioners contain refrigerant which has historically had bad press due to its contribution to the greenhouse effect.

By switching to a highly efficient. low carbon heating solution, such as a heat pump, you could be making a wise choice financially, and doing your bit to protect the future of our planet.

Annual AC service and maintenance checks by a qualified engineer are recommended and will improve your air conditioner’s efficiency and performance in Las Vegas. This in turn will help to reduce your energy usage and in turn reduce your environmental impact as well as keep you running costs and bills low.

Want to use the most enviromentally friendly air conditioners? - technology in this area has advanced at a rapid pace in a last couple of years. Most new systems has a lot of different energy saving features. There is a great variety of them available on a market today, choosing the most eco-friendly and cost-efficient air conditioner can be quite a daunting task.

To make your decision an informed and easy one please contact our HVAC Specialists: 702-935-0777 who will be able to assess your needs and recommend a best suitable solution.

745 Verified Ratings
Ratings
All trademarks are the property of their respective owners. All company, product and service names used on this webpage are for identification purposes only. Use of these names, trademarks and brands does not imply any endorsement, affiliation or relationship with Top Rated Local or its affiliates
Powered by Top Rated Local®